Today I just released my “Infidel” pictorial. It’s one of my special pictorials that carries with it a statement, for lack of a better term.

I began Black Label Magazine with one such pictorial: “The Sanctum of St. Magdalene” which was intended to mock the iconography of the Catholic Church (and Christianity in general, for that matter). In my view, it was designed to out the hypocrisy of that religion. I created it at a time when I found myself surrounded by borderline and outright Christian fanatics—some of whom decried the fact that I was creating sensual photographs for housewives (pre-porn days). Being judged like that, as some of you may understand, fills one with angst. The way I released the angst back then was by creating that work. Such has been my pattern during times of upheaval and crisis (see: American Debauchery & the FOSTA pictorial). 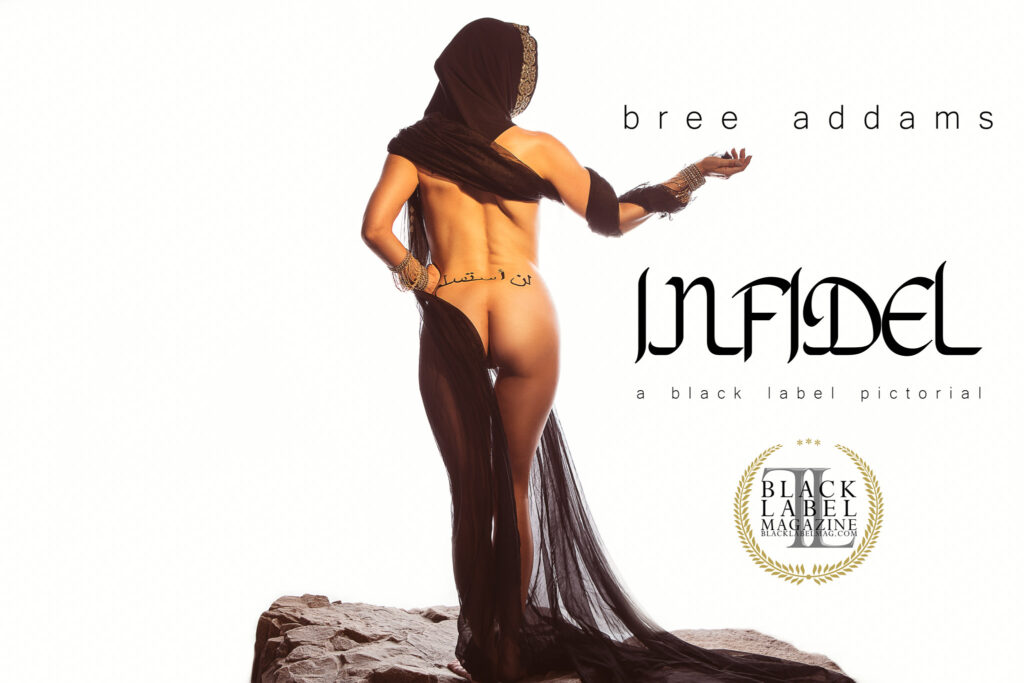 “Infidel” was also created in that vein. I actually came up with the concept back in 2015, just as Black Label Magazine was being planned. The Charlie Hedbo and Paris terror attacks were fresh in everyone’s minds. My instinct was to have the “Infidel” concept be the lead for our launch, but for a multitude of reasons, we opted not to. As 2015/16 raged on, ISIS/ISIL rose to their infamy. The city of Mosul fell to and then was held by that terror group for almost two years—and that was something that struck close to home. I had spent a year in Mosul with the 101st Airborne Division, playing a small role in trying to make it a better place post-invasion. Watching all that I had been a part of become undone as ISIS captured it and other places was heartbreaking.

Still, I sat on the “Infidel” idea until 2017, when an uptick in ISIS “lone-wolf” attacks occurred. Terrorists were shooting up nightclubs and running cars into crowds—all in the name of submission to a hardline religious belief. We decadent westerners were the infidels: evil sinners that deserved to be punished. The angst returned, and I found a model willing to play the part. Bree Addams let me dress her in a hijab and nothing else, and let makeup artist Floofie paint “Infidel” on her stomach and “I will not submit” on her back in beautiful Arabic scroll.

This was us saying: “Fuck you, we will not submit.” Your de-humanizing, archaic, and tyrannical beliefs ought to have no place in our world. It is those beliefs that cause turmoil in the world more than anything else. But delving deeper into the concept behind the concept: it isn’t just about Islam. It isn’t just about Christianity. It’s about polarization and elitism. Here are two belief systems which at their core say the same thing—both positively and negatively—and yet they hate each other with a fervor that is unmatched. What sense does that make? Yet this polarization is at the very heart of what belief has become. “I’m right because I am a [insert religion here], and therefore I’m better than you because I’ll be in God’s grace.” The world isn’t using its beliefs and opinions to foster goodwill and love for your fellow human. No, humanity is using its belief systems to foster individual and collective elitism.

I’ve chosen to release this now, though its relevance is not exactly current, because of the upheaval now in play on our streets.

Another unarmed black man has been killed by the police. The country is awash with protests and violent rioting.

Before I go on, I want to clearly state that I have absolutely no place to preach about the racism that still exists in this country. I am born to white privilege. I have been afforded opportunities that people with darker skin have not. It is not my place to say anything. I do not understand, no matter how much I want to say that I do, because I have not been a victim of this racism. I have no voice in this fight, except to say: “I hear you.” It’s my job to listen, and not be a virtue signaler.

So, at the risk of sounding like the white-privileged-ass-attention-seeker, I will explain why I attach this message to the “Infidel” pictorial.

These are all fictions we tell ourselves to release our angst.

The anger that people of color are expressing is rooted in the same cause: organized society is based on a principle that we should have evolved past: elitism. We live in a world that favors elitism—an elitism that has its roots hoarding wealth and power. The mechanism for securing that elitism varies: from interest rates and credit scores to religion to racism. It’s all about the same thing: we have, embedded in our DNA maybe, this glitch in our brains that makes us want to say “I’m better than you.” Maybe it was religion that passed this glitch down, generation to generation. Or maybe religion is simply a construct created to mask a collective lust for power over others. Whatever it is, we must get over this lust for elitism. We must overcome this incessant need as a society to prove that we are better than others. We’re not.

I quote John F. Kennedy: “We all inhabit this small planet; we all breathe the same air; and we are all mortal.” This is the most important truth in life that we must all take to heart. Remember this fact and you might start being kinder and gentler to your fellow humans.

Find a better way to release your angst.

*I truly wish that I could have collaborated with a person of color and created an edgy and powerful pictorial more relevant to the situation. However, due to the entire industry being shut down right now, no new pictorial was possible.

See the Infidel Pictorial in Bree Addam's Gallery
0
Lincoln June 11, 2020
No Comments Yet

A Sensual Bath with Serene Siren

A Clean Conclusion to "Those Minks Are Soft"... After her…

Mindi Mink and Serene Siren, Together for the First Time!

Ryanne Redd rolls out "The Tube" Series... One sexy woman.…

After a hiatus of nearly two years, Black Label begins…
A Tease from our Sponsors
'